How to Write the Perfect Job Listing for a Janitor

People always ask me how they can get more long-term candidates interested in their open positions.

The truth is, there is always going to be turnover with hourly wage positions. Period.

But there are things to do to help reduce that turnover, and it starts with the hiring process.

There are many things to delve into here as it relates to the interviewing process and the hiring manager’s behavior, but let’s start at the beginning - the job posting itself.

Kwantek’s Applicant Tracking Software has generated over one million applications for janitors, and our onboarding tools give us the data to help us understand how long those applicants stay in the job.

We have found the commonalities in job postings that not only get lots of applicants, but produce long-lasting employees. Here is what we’ve found:

Part One - The Preview: What Gets Them to Read the Next Line?

When creating a great job posting you have to recognize the behavior of the person you are trying to reach.

According to Indeed, over 80% of building, grounds cleaning and maintenance job searches originated from a mobile device.

Your target is scrolling through hundreds to thousands of available jobs. Oftentimes, you’re competing with McDonald’s and Wal-Mart for the same employees.

How can you differentiate your position? What gets them to read that next line? Understanding how to craft your title and description is the critical first step.

Tip #1) Include specific locations in the title, but NOT just ‘City, State’

Tip #2) If you have competitive rates, add it to the title

Competitive rates displayed in the job title are more likely to attract applicants. This may seem obvious, but including the pay (if it’s a good rate) provides a huge boost to your job posting’s click rate. Conversely, if your pay isn’t competitive, get it out of the title!

The final thing the user sees is the day the posting was created. If you have an evergreen job posting, it’s vital to continuously refresh it. Otherwise, the user perceives the job as being either filled or undesirable, and the click rate will decrease.

Here is a handy graphic to share the differences with you: 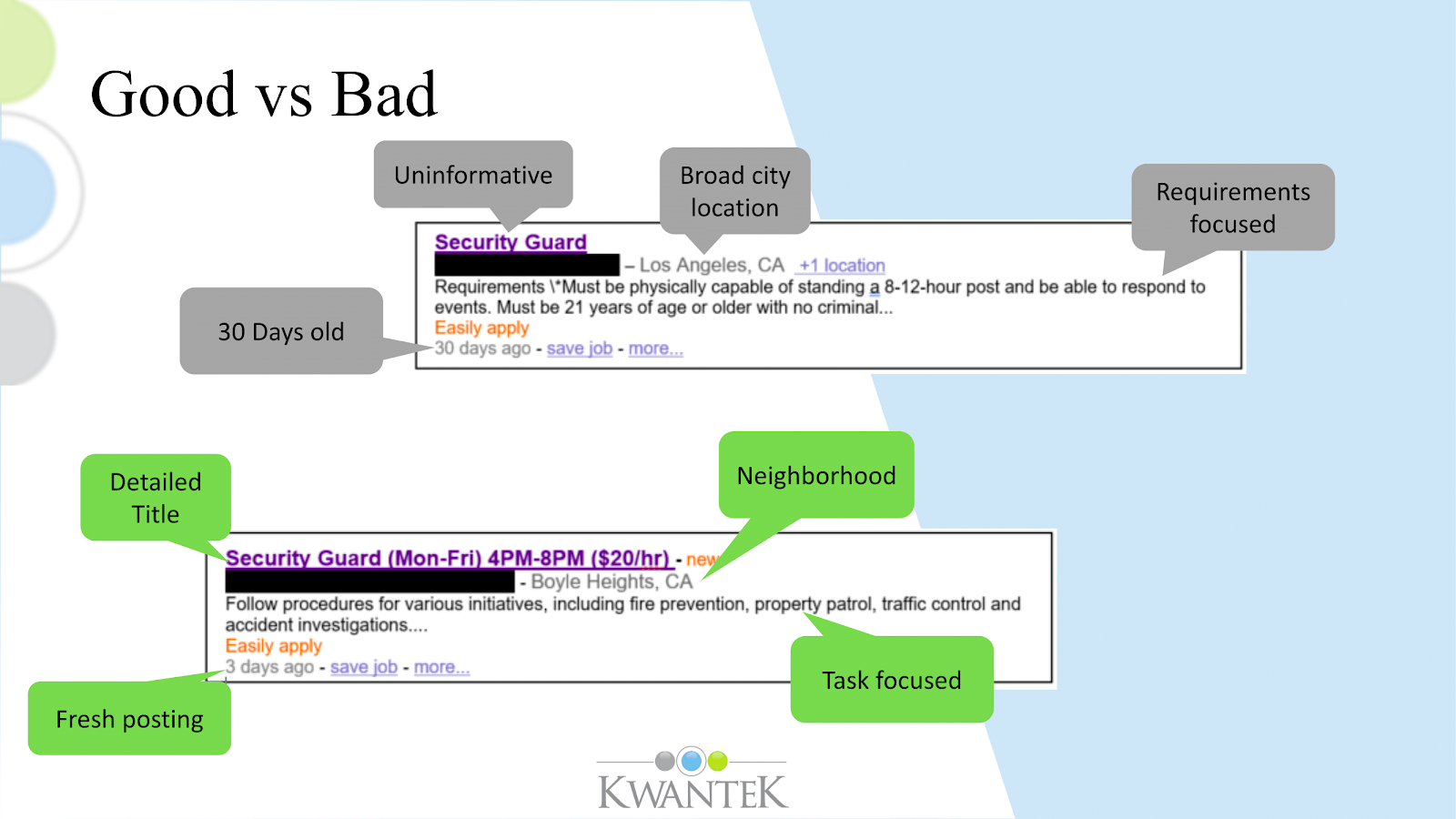 Part Two: What’s in it for them?

Retention starts with the job posting.

Let’s face it. Janitorial work is not a glamorous job. Don’t sugarcoat that. But we can absolutely showcase the positives in the work.

First, if the janitor is doing their job correctly, they’ll go weeks or months without ever having to see their boss. Highlight this autonomy in the job posting.

Focus on how important the work is and try to add purpose to it.

Establishing the sense of purpose will help them feel much more confident in themselves and in their jobs.

You might reduce your number of applicants in the process of being so transparent, but you’re also increasing the likelihood of making a selection that is going to stick around long-term.

In summary, the best thing to do before posting your job is to simply know exactly what you are looking for before you post it.

That way, you can create job descriptions that are:

Explore our site
About Kwantek